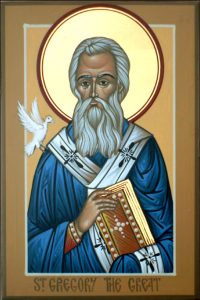 Pope Gregory 1, commonly known as Gregory the Great , was one of the most fascinating of the early church leaders. He was in many ways the Apostle of England, sending monks from his former monastery, led by St Augustine, to convert Britain. We, in this country, owe to him our Christian faith.

Gregory was born in Rome around 540 AD, the son of a Roman Senator. Following his father’s death, he also embarked on a political career and rose through the ranks to become Mayor of Rome.

In 574 he entered the monastery of St Andrew and eventually became Abbot In 590, on the death of Pope Leo, Gregory was elected to succeed him – the first ever monk elected as Successor of Peter. St Gregory really wanted nothing more than to be a simple monk and struggled profoundly before finally accepting his election as the will of God.

At this time the affairs of both the church and society, were in chaos. He took over the civic and spiritual leadership of Italy, appointing governors of the various Italian cities. He did much to relieve the sufferings of the poor and was a great evangelist.

He wrote abundantly, more on a spiritual and practical level than doctrinal or theoretical. He also wrote about the life of his master St Benedict and other saints of the period. He was devoted to the Liturgy of the Church and promoted sacred music. The plainsong that comes down to us from this era is famously known as the “Gregorian Chant”.

Gregory who died in 604 AD, is known as one of the four greatest Fathers and Doctors of the Church.