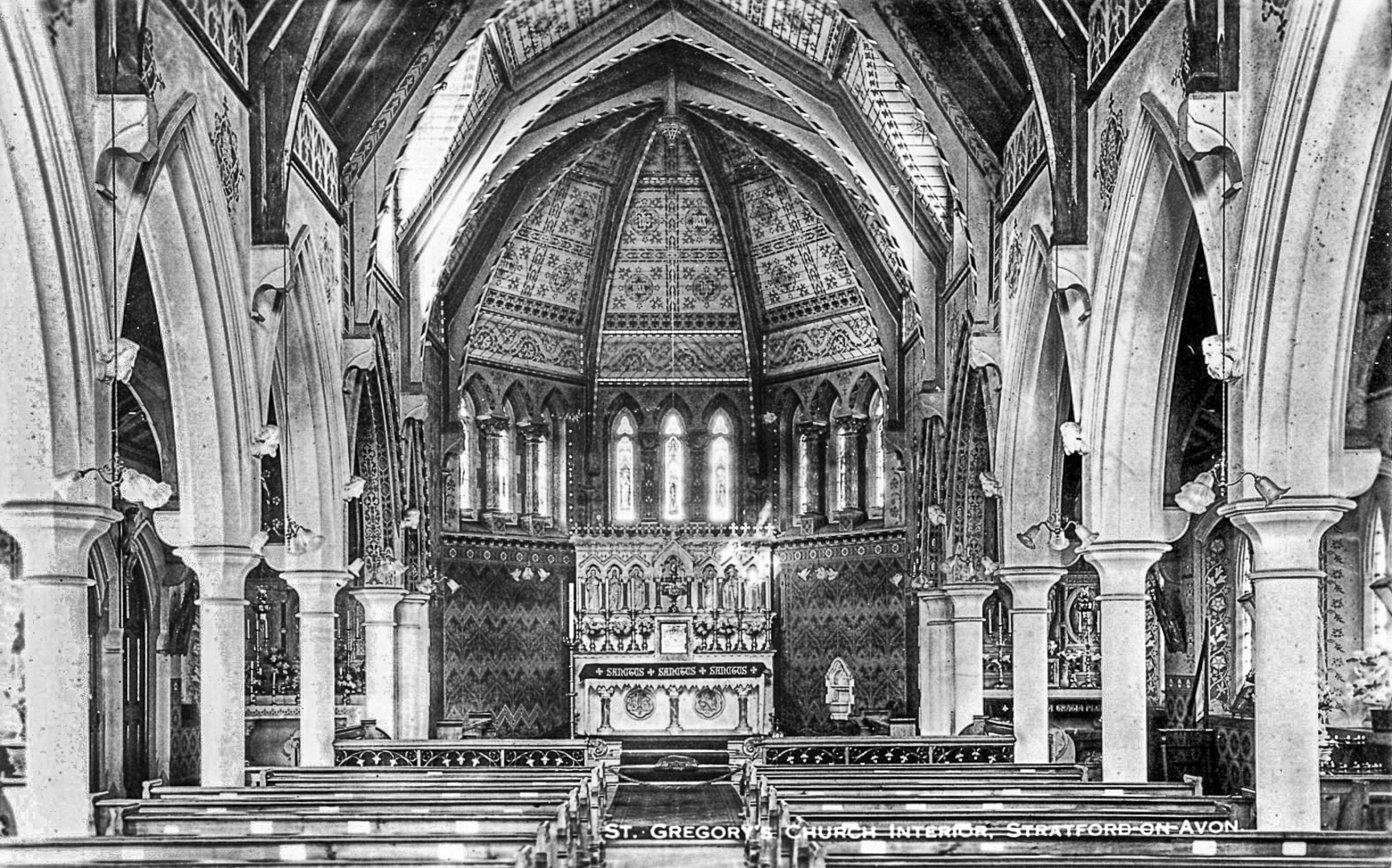 From the Reformation, Roman Catholic communities in England were known as Missions, but there was none in Stratford until until 1849. The Benedictine Monks, living at the village of Wootton Wawen looked after the spiritual needs of the Stratford Roman Catholics before that.

On St. Gregory’s Day 1849 it was decided that it was no longer appropriate for the busy town of Stratford-upon-Avon (which had about 8,000 inhabitants at that time) to be administered from Wootton Wawen. The money was raised to purchase a site for a church and a cemetery in Stratford and these were bought on 5th April 1850.

In 1852 the Benedictine Order withdrew temporarily from Stratford and a diocesan priest was appointed to take charge of the Mission. He immediately secured approval for the cancellation of the Benedictine plans for the the church on the outskirts of the town. The priest was living in Rother House, 12-13 Rother Street now part of the Civic Hall (recently renamed Stratford Artshouse) and a temporary Chapel was opened there in 1853. He then purchased two houses in the same street, to be used as a chapel, a library and a small school. These were all sold in 1857; the priest gave ill-health as his reason for closing the buildings, and left the town.

The Benedictines from Wootton Wawen returned immediately to Stratford and revived the Warwick Road project. They opened temporary chapels in Wood Street until they could build the present church. The plans for this were drawn up by Edward Welby Pugin, son of Augustus Welby Northmore Pugin. The building was completed on 30th July 1866 and the church was opened and dedicated to St. Gregory the Great on 23rd October 1866.

St. Gregory’s Church again became the focal point during the late 1950s. The resident Catholic population was increasing to such an extent that the church did not have sufficient capacity to cope. In 1956 it was suggested that a site for a new church on the west side of town should be found. This was blessed in 1962 and the church was opened on 22nd May 1973. It was dedicated to Our Lady of Peace and, at the Silver Jubilee celebrations in 1998, it was suggested that the name of Blessed Robert Dibdale (a local martyr) should be added.

The Centenary of the opening of the Church of St Gregory the Great was celebrated on 23rd October 1966. A former Baptist Chapel in Tiddington was acquired by the Diocese and became known as St Joseph’s. It was opened on 8th December 1967 and served the needs of parishioners south of the river and in Alveston until its closure on 5th November 2000.

For many years after the building of St. Gregory’s church the Angelus prayers had been heralded by the ringing of a bell in its Bell Tower. This had fallen down in 1935 but no action had been taken at that time to replace the bell until 1988, when a new bell was commissioned from the John Taylor Bell Foundry in Loughborough. This was installed in the newly constructed bell cote in October of that year. Chimes rang out at 6.00 a.m., midday and 6.00 p.m. from St. Gregory’s Church after a silence of 53 years and continue to the present.

In 1996, on the occasion of the 800th anniversary of two charters granted to the town, permission was given to celebrate a Roman Catholic Mass in the Guild Chapel, the first since the Reformation. This annual event has continued since then.

When St. Gregory’s church was first built, the priests lived in various houses in the town and then in the house which was attached to it from 1889, but they moved across to St. Gregory’s Road into the Priory in 1974 (which was previously used as a private Convent School) and this was used for all parish functions. During this time the house attached to the church was let out as three flats, but, as the last one became vacant in 2007 arrangements were made for the house to be reverted for use as the Parish Presbytery. In 2011 the larger rear sacristy at St. Gregory’s was converted to become the Parish Office and the Priory was sold in 2013, making the construction of a parish meeting room a priority. This was built at the rear of St. Gregory’s Church and was formally blessed and opened on 1st March 2014.

From the transfer of the Mission to Stratford, small temporary schools had been set up in various places. In 1873 a permanent school to be started at 19 Payton Street. In November 1878 the school (St. Mary’s R.C. School) moved to number 8 Warwick Road, and in May 1880 the Department of Education recognised the school as being fit to receive Government grants and it was then given the name of St. Gregory. In 1882 land was purchased at the top of Henley Street to build a new school and this was opened on 17th March 1884. In September 1939 the New Senior School was added to the Junior and Infant School. By February 1951 there were classes and a dining room not only in the main building and in the school playground, but also in six other locations.

In July 1958 the plans for a new school in Avenue Road were approved and this was opened on 29th September 1960. A swimming pool was added, and two further classrooms in 1967. The present Junior and Infant School was completed in January 1970. All the children and staff were under the same roof for the first time.The old school in Henley Street is now let out and is occasionally still used in the evening for parish purposes.

These extracts are adapted from ‘A History of the Parish of Saint Gregory the Great Stratford-upon-Avon, 1852-2002 by Gerald Morris and 2003-2014 by Doreen Morris’.